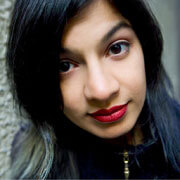 AMBER QURESHI has most recently been an editor at Seven Stories Press, acquiring every kind of quality trade book, including works in translation, literary fiction and progressive nonfiction. She was a 2007 Editorial Fellow at the Jerusalem Book Fair and is on the American board for the Fair now, has represented her list at the Frankfurt Book Fair, the IFOA Harbourfront Toronto Writers' Festival, the Tennessee Williams New Orleans Literary Festival, the Adelaide Writers' Festival, the Sharjah International Book Fair, the Jaipur Literary Festival, and the Salon du Livres in Paris, and has taught at writers' conferences at the New School in New York City, in Asheville, North Carolina, and in Aspen, Colorado. She acquired and edited THE WHITE TIGER by Aravind Adiga, winner of the Man Booker Prize 2008. Previously at Free Press/Simon and Schuster, her first acquisition there, SONGS FOR THE BUTCHER'S DAUGHTER by Peter Manseau, won the 2009 National Jewish Book Award; her next acquisition, HEART LIKE WATER by Joshua Clark, was nominated for a 2008 National Book Critics Circle Award; one of her last acquisitions there, THE MADONNAS OF ECHO PARK by Brando Skyhorse, won the PEN/Hemingway and Sue Kaufman Awards. At Picador, she acquired the bestselling, Orange and Whitbread award-winning SMALL ISLAND by Andrea Levy, the NBCC award-winning VOICES FROM CHERNOBYL, THE SEAS by Samantha Hunt and three books by acclaimed Japanese writer Yoko Ogawa, among other books. As editor at Viking/Penguin, she acquired Adam Mansbach's graffiti book RAGE IS BACK, among other groundbreaking titles. She worked in Editorial at Alfred A. Knopf for several years; before that, she worked at a translation house in Tokyo. Fluent in French and Japanese, she studied Pure Mathematics/Algebraic Topology as an undergraduate and as a Monbusho Scholar in the Graduate School of Chiba University, Japan. In these capacities, she has worked with such authors as Haruki Murakami, Jay McInerney, Michel Houellebecq, Jim Shepard, Matt Mason, Michel Foucault, Adam Mansbach, Virginia Postrel, Ian Thomson, Stephen Elliott, Emily Gould, Daniel Bergner, Robin Robertson, Matt Haig, and Leslie Jamison.